Delta Sigma Theta Sorority, Incorporated. is a private, not-for-profit organization whose purpose is to provide assistance and support through established programs in local communities throughout the world. Since its founding more than 300,000 women have joined the organization. The organization is a sisterhood of predominantly Black, college educated women. The sorority currently has 1,000 collegiate and alumnae chapters located in the United States, Canada, Japan (Tokyo and Okinawa), Germany, the Virgin Islands, Bermuda, the Bahamas, Jamaica and the Republic of Korea.

The major programs of the Sorority are based upon the organization’s Five-Point Programmatic Thrust:  For more information, visit our national website at www.deltasigmatheta.org. 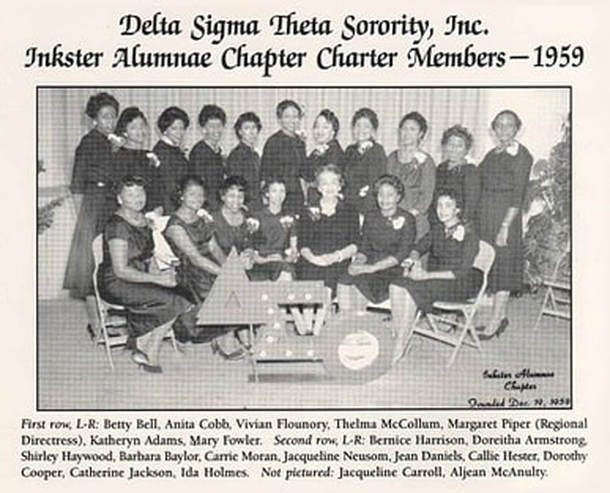 The chapter has instituted many programs designed to boost the academic achievements of Inkster area students. Since the chapter’s earliest days, its members have awarded hundreds of scholarships to high achieving students. The chapter has also mentored girls through its Delta Gems program (formerly known as the Peppermints Youth Group). Recently, the Delta Academy has been formed. The chapter’s innovative, “Book and Blanket,” program which encouraged parent-to child reading, was featured in an educational textbook in the 1990’s. The chapter also sponsored Black College Tours and tutorial programs designed to boost the standardized test scores of Inkster area high school seniors. In recent years, the chapter has partnered with other Greek-Letter-Organizations and community groups for the Super Saturday program.

The chapter’s service includes many successful programs designed to boost awareness about mental and physical health issues. In recent years, the chapter has focused on outreach efforts to address the toll that HIV/AIDS has had on the black community, especially African American women. International Awareness has also held forums on the effect AIDS in having in Africa. Recognizing the importance of economic development in the community, the chapter has sponsored credit repair and investing workshops.